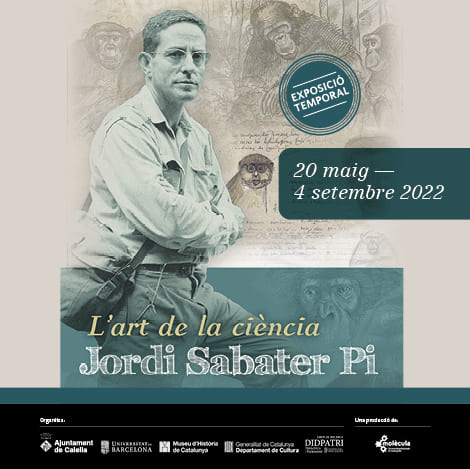 Jordi Sabater Pi (Barcelona, August 2nd, 1922 – August 5th, 2009), will be remembered for the discovery of Snowflake, the albino gorilla that lived for almost 40 years in Barcelona Zoo.  But Sabater Pi is much more than the person who discovered this famous animal.

He was also an internationally recognized scientist known for his discoveries about chimpanzees, about the culture of tribes like the Fang and for having worked with Diane Fossey …… but what interests us most about his scientific facet is his ability to observe, which he considered the basis of knowledge.

In this exhibition we want to discover Sabater,  the artist, cartoonist, photographer, observer of detail; Jordi Sabater wrote tirelessly in his notebooks,  anatomical notes, measurements, colours, portraits, tattoos, expressions.  We will review the meaning of these scientific drawings,  essential for observation and analysis, that will never be surpassed for the gaining of knowledge, and that, more than ever, need to be rediscovered as a training discipline for our future scientists.

← WHAT ARE WE EATING TODAY?
DURGA’S DAUGHTERS →