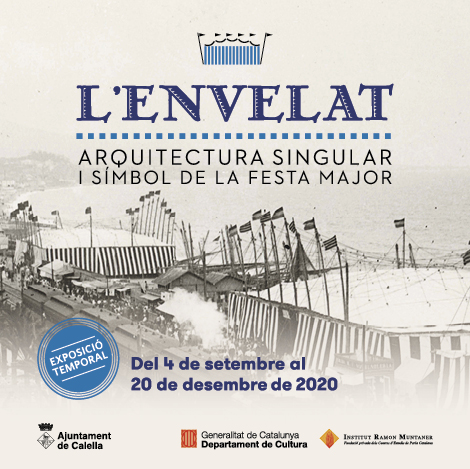 The “Envelats”, the old traditional festival tents of Catalonia, hereafter called as Catalan marquees, have been a cultural phenomenom with important relevance in Catalan society for almost a century and a half.

Arising in the context of profound social changes during the early decades of the nineteenth century, as a result of the great affection for dancing in Barcelona at that time, the Catalan marquees expanded rapidly around the Catalan territory becoming an essential and emblematic element of the popular festivals.

The creators of the Catalan marquees, starting with the expertise and equipment of fishermen and sailors (sails, ropes, pulleys, knots, etc.), conceived a unique and spectacular detachable structure, that could cover a large area without needing interior suports.

Erected in vacant lots and town and village squares, in order to accomodate the various events of the main festivals programs (dances, concerts, meals, contests, shows, etc.) the Catalan marquees became a socially relevant fact and a uniquely Catalan contribution to architecture for their revolutionary structural concept, very advanced for its time.

The traditional Catalan marquees, which suffered a slow agonizing death , during the nineteen seventies, until their total disappearence, survive in the memory and the festive and sentimental imagination of the old people generation.

This exhibition dreams of rescuing the Catalan marquees from oblivion, claiming and enhancing their value as a heritage asset and an original and significant creation of Catalan architecture and popular festive culture, stimulating historical research and protecting the documents and materials relating to the Catalan marquees, and promoting their recovery and recreation with new concepts and architectural proposals.

For more information you can call 937695102 or send email to: visitmutur@calella.cat