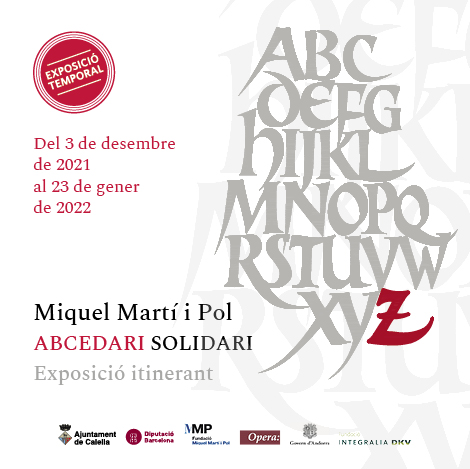 The Abcedari Solidarity exhibition is a tribute to the Catalan poet Miquel Martí i Pol.

The main references in Martí i Pol’s work can be found in his connection with his land, Roda de Ter and his commitment to his social class – the working people -, his country and his language.  All of this, together with his dedication to poetry, defines him as an artist of letters.

Illness also had a strong influence on his life.  He first suffered from pulmonary tuberculosis at the age of 19.  The young man took advantage of the time he spent in bed, which was almost a year, to read and to magnify his talent to become the poet he became. Later, at the age of 41, he was diagnosed with multiple sclerosis, which forever marked his work, the first stage due to the loneliness he felt.   But the isolation and the anguish he suffers gives way, little by little, to overcoming and renewing the joy of life which makes him write again and look to the future.

The work of Miquel Martí i Pol stand out as one of the most important poetic contributions to contemporary Catalan literature.  In addition to being an author, he was mainly a translator of French and also a cultural activist who managed to bring poetry out of the most cultured and elitist circles to reach the popular classes.  A good example of this is the more than 100,000 copies sold of his book of poems “Dear Martha”.  Martí i Pol was not a fan of receiving great honours, he did not want to be remembered as a great poet, but simply as just a poet.

This exhibition has been designed from his work Abcedari, a jewel of solidarity, which he wrote with the complicity of his personal friend Ramon Besora. The book is a collection of twenty-six haiku (Japanese poems of seventeen syllables that are very present in Catalan poetry) a haiku for each letter of the alphabet, with the theme of solidarity as the guiding thread.  Difference (and indifference), acceptance or loss are present, along with more social and compromising topics, common in this literature such as pain, illness, or adversity.  Martí i Pol writes the secret alphabet of human solidarity, creating a refuge for dreams, where the capacity to believe in others marks the difference.

We have asked visual artists, poets and writers to be inspired by one of the twenty-six haiku by Martí i Pol, to produce a new work, reinterpreting them twenty years later.    The result of this work is the exhibition you are about to see, a new project where we unite art and literature again.  I hope it makes you dream and love, as much as it has me.

← STONES AND HUNTS
WHAT ARE WE EATING TODAY? →